The year 2018 marked a historic milestone for Lesedi Nuclear Services. For years, the branding of Lesedi reflected the identity of its majority stakeholder, AREVA Nuclear Power. During the past few years, Lesedi has increasingly diversified into a major engineering, procurement and construction (EPC) company, having successfully completed numerous key projects in nuclear, industrial power, mining, and oil & gas environments.

Lesedi is on a journey of transformation, not only in terms of core business offering, but also in terms of preparing for digitisation, mentoring the next generation of leaders, and to contribute to the transformation agenda of South Africa.

With Lesedi evolving into a firmly established African company, the time arrived to rebrand the company to better reflect its purpose and vision for the future. Lesedi’s main shareholder AREVA, renamed to Framatome in January 2018. This was an opportune moment for Lesedi to reflect and come into its own as a home-grown African company.

On Tuesday, 15 May 2018, Lesedi revealed their new identity and brand positioning during Africa Utility Week (AUW) in Cape Town. Lesedi CEO, Francis Carruthers and the Lesedi management team hosted a  launch cocktail function to mark this historic milestone. Various clients, employees and other stakeholders, were guests as Lesedi revealed its new brand and logo. 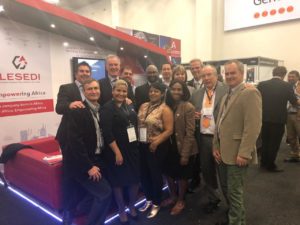 CEO and founder of Lesedi, Francis Carruthers commented: “The brand identity is inspired by a graphic version of the African Adinkra symbol for energy, and a symbol emphasizing the importance of the relationship that we build with all our stakeholders. The subtle inclusion of the historic AREVA ‘A’, indicates our origin and history and at the same time the icon reflects evolution, growth and ambition.”

Back to News Page